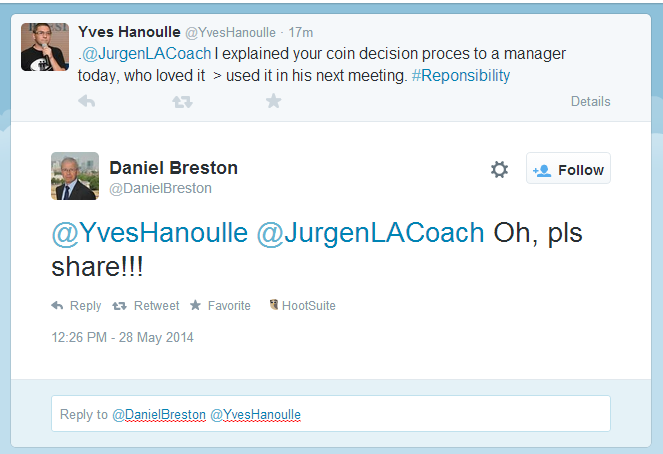 In my past, as a manager, people came to me for decisions and in a lot of cases this meant spending a lot of time trying to figure out for myself what the pro/cons were of option A versus option B in order to make a valid decision. At the same time I wanted the organisation for itself to take up more responsibilities and by making decisions myself I prevented the organisation of getting there.

In order to solve both problems at the same time I had to come up with a way that helped the organisation grow. While trying to figure out what would be a good approach and which game techniques I could apply I realized that the work I did to explore the details of the options at hand was actually not in sync with the benefit the organisation got out of it. In fact I realized that people only came to me with 2 different but equally valid options and choosing either one of them is a damn good decision. There is nothing worse than standing still, over analyzing the situation, and that’s what I did before. At the same time I wanted to teach this learning to the people coming to me for a option A vs B decision in order to grow responsibilities within the organisation and that’s when I came up with the “coin flip decision process”.

The results of deciding fast

So next time when people from the team(s) came to me to make a decision between several options for them I simply asked what the different cost (time to implement) was between the options and when that was pretty equal I just flipped a coin where option A was heads and option B was tail. Sticking to the decision of the flip! Of course people were surprised and asked me why I didn’t care. That’s the moment where I explained that to me both options were equally valid and that it is great to have a backup scenario already at hand just in case the option selected didn’t work out well. The benefit of doing this is that you save time to analyse both options yourself, people can immediately start implementing the solution and thus deliver faster (increasing our ROI). At the same time the team(s) learned not to come to me anymore for similar decision making and took responsibility themselves to move on and deliver. This didn’t fit a tweet and so the post…

Enjoy and have fun! 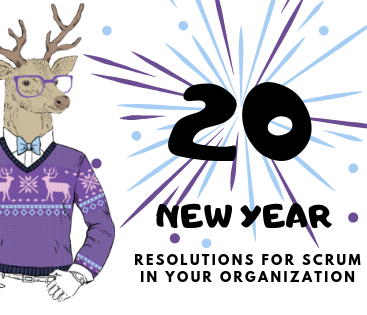 20 New Year’s Resolutions for Scrum in Your Organization

The end of the year is nearby, time for some New Year’s resolutions! Last year we provided some help to get started for Change Agents, the year before we got the Scrum Masters started and long time ago the busy Scrum Product Owners, this year we want to support your entire organization to adopt Scrum … 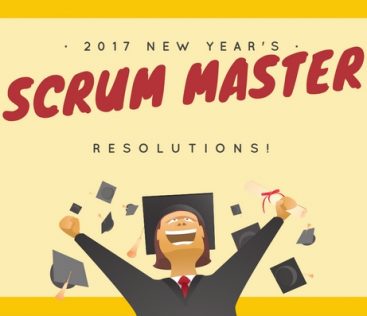 The end of the year is nearby, time for some New Year’s resolutions! Last year we provided some help to get started for busy Scrum Product Owners, this year we want to support busy Scrum Masters. Here are 21 new year’s resolutions to get you started Stop being a representative for the teams you work with, …