Fishing for Flow and Peak performance 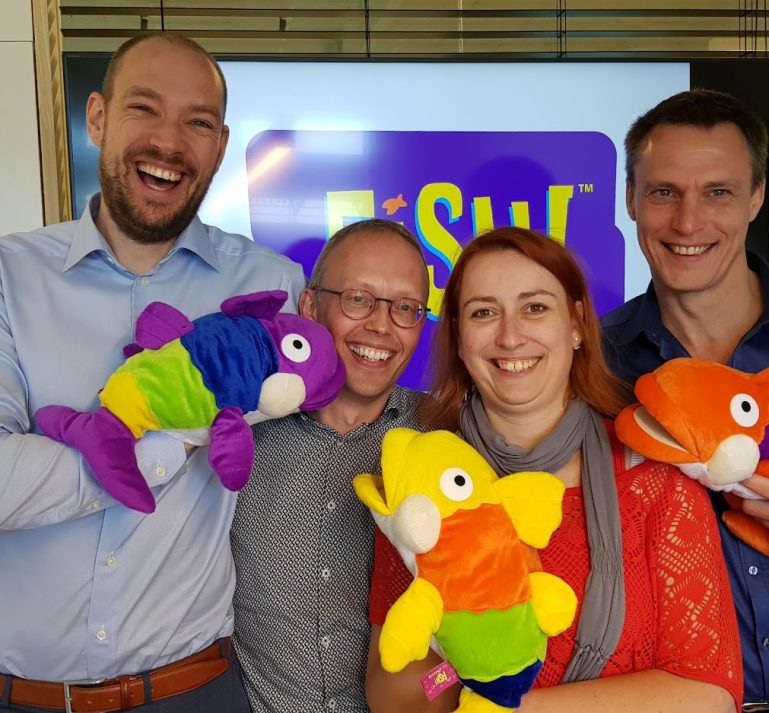 Does flow exist in teams? Can it lead to peak performances in teams?

My first realisation of ‘Flow’ at work was as a developer. I was deeply engrossed in trying to fine tune an optimization method when I started to realise something was ‘wrong’. I felt a prickly feeling in my neck and shoulders that seemed to want to get my attention.

Breaking loose from my screen and looking up I realised my boss was sitting half a meter from me, looking at me with amusement while colleagues in the room were looking at us and laughing.. He told me : I have been sitting here for more than 10 minutes and you didn’t once look up once to notice me!

Most developers have already experienced a ‘Flow state’ , also called .. being ‘In the Zone’. A state where they are so engrossed in their work that they lose track of time and their surroundings. I remember this state as one with the clearest thoughts and most space in my head to develop options on where to proceed.

In Agile teams, the time of lone developers working solo for long periods of time is not encouraged anymore. Cross functional teams with much more group interaction and working together on the same topics with extreme programming and mob programming is the new norm.

This state of flow is characterised by working alone. So, can teams experience this or does this flow only exist on an individual level ?

A flow state, also known as ‘being in the zone’, is a state of operation in which a person is fully immersed with an energized focus, full involvement, and fully enjoying the moment of the activity. Time seems to slow down, sense and perceptions are heightened with a sense of vibrance yet being fully at peace.

When you achieve flow, you enter into a state in which the front of your brain experiences decreased activity, allowing the rest of your brain to function more freely. This state is ideal for creative thinking, as it is less inhibited by the more conscious part of your brain linked to learning.

One of the pioneers of the research on flow is Hungarian psychologist Mihaly Csikszentmihalyi, who named flow in 1975.

Mihaly Csikszentmihalyi, noted in his study on Happiness:

“The best moments in our lives are not the passive, receptive, relaxing times…The best moments usually occur if a person’s body or mind is stretched to its limits in a voluntary effort to accomplish something difficult and worthwhile.”

His work has identified six factors that are present when experiencing flow: 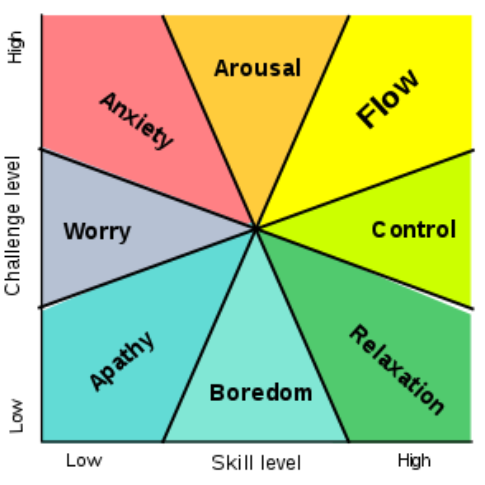 Is Flow linked to higher performances ?

In sports Flow has been extensively studied and is highly desirable for athletes due to the association between flow and peak performance . Peak performance is described as an optimal performance, whereas flow is an intrinsically rewarding feeling. If one achieves peak performance, it is likely he or she was in the flow state.

In teams, the intra-squad competition is an additional flow trigger and athletes reported their experience as “more enjoyable” due to the increased social interactions on a team. It’s interesting to note that team athletes also experienced  a greater sense of control and concentration.

“group flow”, is experienced particularly in cooperative-based gaming. Achieved through collective competence, collaboration and knowledge of others’ skills .

How do you know you are (have been) in flow?

Some signs you can recognise :

The Flow State Scale (FSS) is a new measure of flow in sport and physical activity settings. The FSS contains items measuring  flow described by Csikszentmihalyi some like :

Keith Sawyer’s research found that improvised innovation is more likely to work when a group experiences “group flow” and unexpected insights emerge from the group.

This improved ability to gain insights is what makes flow in teams special from individual flow.

In 2015 Google sought the perfect formula for creating effective teams with Project Aristotle. They learned that team culture and not performance was the most important measure of effectiveness. Laszlo Bock, the head of the People Operations department at Google, concluded: “The biggest thing you should take away from this work is that how teams work matters more than who is on them. You can take a team of average performers, and if you teach them to interact in the right way, they’ll do things no superstar could ever accomplish.”

So is there something about teamwork that can spark extraordinary results ?

Breakthrough innovation usually emerges from a series of sparks in collaboration, rarely from a lonely flash of genius.

The improvisational collaboration of the entire group translates moments of individual creativity into group innovation. Allowing the space for this self-organizing emergence to occur is difficult for many managers because the outcome isn’t controlled by the management team’s agenda and is therefore less predictable. The big difference is the continuous way the group works together instead of taking discrete moments where learning and discovery is encouraged.

As the legendary Chicago Bulls coach Phil Jackson put it: “Basketball is an improvisational game, similar to jazz. If someone drops a note, someone else must step into the vacuum and drive the beat.” What’s the magical chemistry that happens when a team improvises in response to every move by their opponents, without saying a word, and wins the game? The answer can’t be found in the skill or creativity of any one player; the entire group makes it happen.

Every so often a Celtic game would heat up so that it became more than a physical or even mental game, and would be magical. That feeling is difficult to describe, and I certainly never talked about it when I was playing. The game would just take off, and there’d be a natural ebb and flow that reminded you of how rhythmic and musical basketball is supposed to be.… It was almost as if we were playing in slow motion. When it happened I could feel my play rise to a new level. It came rarely, and would last anywhere from five minutes to a whole quarter or more. Three or four plays were not enough to get it going. It would surround not only me and the other Celtics but also the players on the other team, and even the referees. To me, the key was that both teams had to be playing at their peaks, and they had to be competitive. The Celtics could not to it alone.

Does this only happen in sport teams ?

Csikszentmihalyi found that the most common place that people experienced flow was in conversation with others.. This is an important fact in understanding Flow can exist at work in teams.

Deep listening and  “being present”

Being present is about giving your full, undivided, attention – actively listening. Once you start taking notice, you’ll see a lot of examples of -not- being present.  Doing some other task when someone is talking to you at a phone, using a computer during a meeting. It’s a powerful message of respect that improves communication and strengthens relationships. Being present is one of the four principles of the FISH! Philosophy.

This flow states trigger refers to the novelty, unpredictability, and complexity of the environment.  The greater these three factors are, the more it forces us to focus our attention. Richness is also about the richness of the team member interactions. This is when team members encourage and “ignite” each other.

This is a direct result of the FISH! Philosophy: People who live FISH! listen to understand, not just reply. They communicate honestly and respectfully. They welcome new ideas. People feel safe and supported, contributing all of their talents and energy.

The ability and/or freedom to be creative is another flow trigger.  Recognizing patterns and linking ideas and techniques together to develop new approaches in situations can trigger flow and flow then creates a greater capacity for creativity.

Play, a principle in Fish! Is a great enabler here. The opposite of Play isn’t work—it’s depression. Research shows a playful spirit fuels an enthused, creative workforce. It reduces stress, which impairs clear thinking, and builds a positive energy that increases productivity and delights customers. People feel safe to “play” with ideas that move the organization forward.

People get into flow when they’re in control of their actions and their environment.

Group flow increases when people feel autonomy, competence, and relatedness. Many studies have found that team autonomy is the top predictor of team performance. But in group flow, unlike solo flow, control results in a paradox: participants must feel in control, yet at the same time they must remain flexible, listen closely, and always be willing to defer to the emergent flow of the group.

Reaching autonomy needs the right attitude. Take responsibility for how you respond to what life throws at you. Your choice affects others. Ask yourself: “Is my attitude helping my team or my customers? Is it helping me to be the person I want to be?”

Group flow is more likely when a group can work undisturbed. Companies should identify a special location for group flow.

For solo Flow : Prolonged periods of focused attention are required without interruptions.  It also means that we must focus on a singular task and it must be in solitude (ie. alone).

Group Flow : Keep the conversation based on the task at hand. Keep the energy going. Have the courage to identify and name distractions.

We must receive immediate feedback on the results of the actions towards our clear goals.  This allows us to improve or make corrections moving forward. Short cycle times are core to the Scrum framework to have faster feedback.

Flow in your organisation? 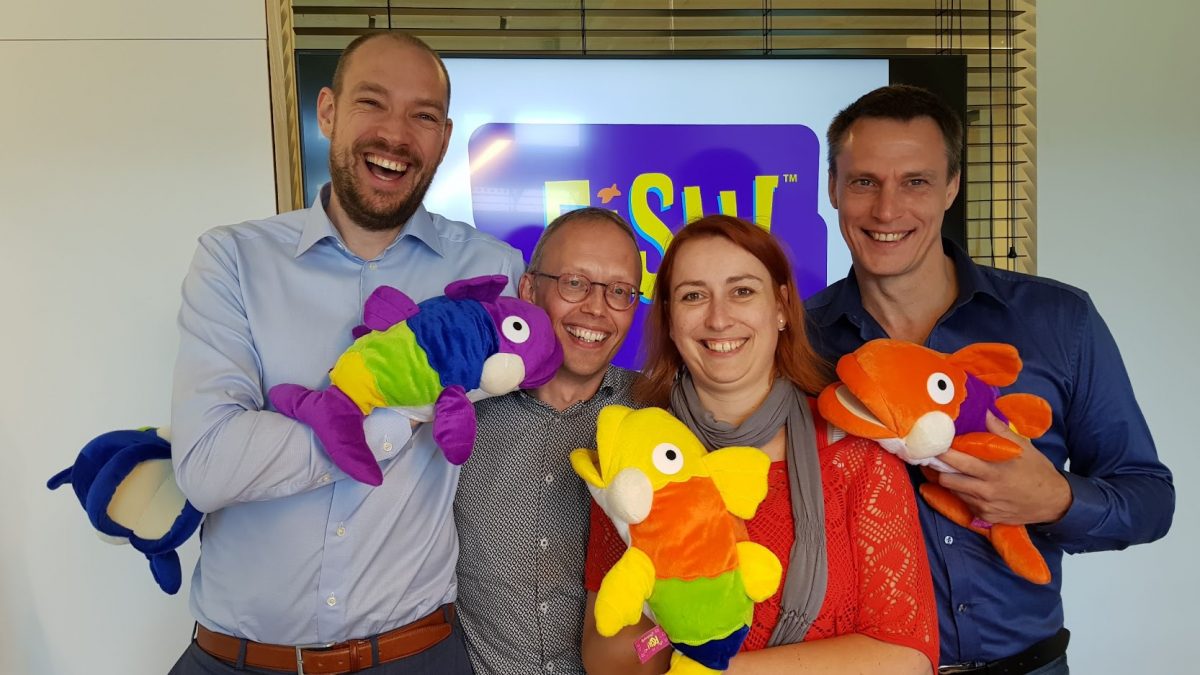 At co-learning we believe that bringing energy, fun and passion to the workplace is essential to reach an organisation of engaged people that are relentlessly focused on customer value and willing to continually improve the way they work.

Want to know more?
Come see us at this Fish! Event : 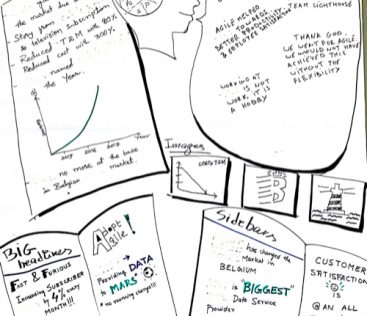 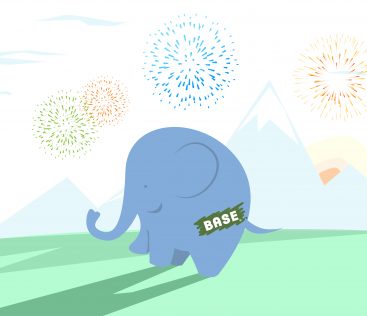 Base Company was the third Mobile Operator in Belgium and stayed within the top 3 market leaders, even today now the organisation has gone through a new change. Their IT was part of the technology department that was also responsible for the mobile network, from design to operations. Within the IT organization were a couple of hundred … 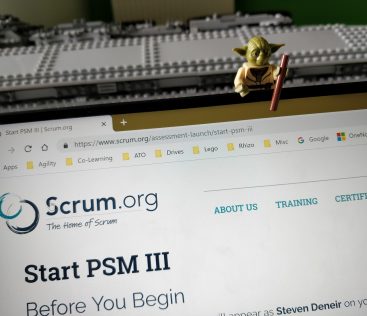